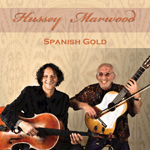 The Spanish Gold EP is the first release by the duo of acoustic guitar and cello. The music contains a varied blend of techniques, genres and styles taken from a wide set of musical traditions whilst fusing both Jazz and classical elements.
A full album is due for release later this year.

The EP is released as digital download and can be downloaded via iTunes, Amazon, Google Play & others.
itunes.apple.com
A High quality duplicated CD Can be purchased through the label shop
www.jambila.co.uk

Two musical adventurers moved to Kent, met as neighbours, and formed a perfect musical partnership.
Cellist, Ivan Hussey began his career at age 17 as a member of the Reggae Philharmonic Orchestra and has since worked as a session cellist and recording artist, playing on over 300 albums for artists such as Mick Jagger, Annie Lennox, Jay Z, Incognito, Duran Duran, Third World, Natacha Atlas, Gabrielle, Roots Manuva and many more. As an artist, he has released four albums under the name Celloman and a further two under his own name.
Guitarist, Steve Marwood was a regular visitor to the studios of both Island records and Virgin Records in the 1970s playing on numerous albums for such names as: Asigai, Johnny Thunder and Kenny Young, as well as being a full time member of Wooden Horse.