Throughout the world there are many cellists experimenting with, and using, a variety of pizzicato-derived techniques on their instruments. Many of the finger techniques used are imported from the world of Pop/Rock, Blues and Jazz including: ‘hammer-on’, ‘hammer-off’, ‘slide’, ‘pop’, ‘slap’, ‘strum’ and ‘Walking bass’.
It can be argued that the combination of these varied finger techniques exceeds the use of the word ‘pizzicato’ and therefore demands a new name.

Ivan has spent a number of years exploring and developing this style of playing under the name Arpezzato, a combination of the words Arpeggio and Pizzicato.

The style originated in use as a texture on the debut album Aquador. In 2019, the first album of compositions for Arpezzato cello was released entitled Arpezzato Cello.
Ivan has taken workshops in the style for the London Cello Society’s Beyond cello and at VISS, the virtual summer school run by the London Suzuki Group.

Ivan is currently demonstrating and explaining the Arpezzato style through his solo acoustic show: Arpezzato: A New Style of Cello Playing. 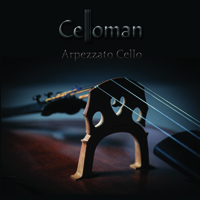 To get in the mood of the forthcoming full band...

All dates for the Celloman: Panacea Album Release Tour are...